Narayana Das headed music college founded as tribute to him 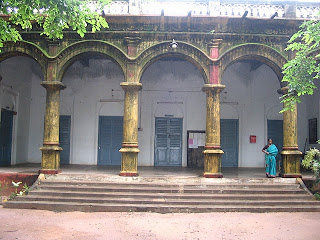 By the second decade of the twentieth century, Pandit Narayana Das' name and fame were established from Calcutta to Kanya Kumari, and prominent newspapers of the day like The Hindu, The Mail, Andhra Patrika et al were singing paeans to his literary and musical accomplishments.  Maharajah Vijayarama Gajapathi of Vizianagaram realised with a feeling of guilt that a citizen of his kingdom went unrecognised in his birthplace. In order to make amends for the oversight, the Maharajah set out to establish a college for music studies as a tribute to the great man and requested Pandit Narayana Das to head the institution.

Initially Narayana Das refused the offer on two counts - one he was already fifty five, an age at which people normally retired and two, he did not wish to serve under a mortal. It was for the same reason that he declined earlier a request of the Maharajah of Mysore, to be the court musician. The Maharajah of Vizianagaram however persisted and offered the principal-ship of the music college, and assured Pandit Narayana Das that he could serve as long as he wished and would continue to receive the salary as pension even after his retirement. Pandit Narayana Das finally agreed to head the institution, with the proviso that it be treated as the temple of Lord Rama and he His servant.

After the death of Maharajah Alakanarayana Gajapathi, the Vizianagaram Samasthanam had a succession battle during the pendency of which it was under the ‘court of wards’ administration. The British administration oblivious of the colossal stature of the artiste or the history of his ‘appointment’ decided to retire him without pension. Pandit Narayana Das gracefully bowed out without a murmur. Two years later he casually recounted this to his friend Mr. Bardswell, who was then a member of the board of revenue, who intervened with the British administration and had the Pandit’s pension restored. 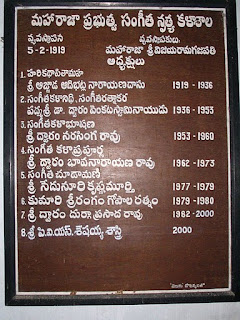 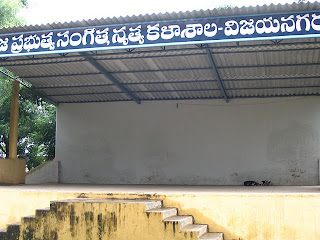 DAIS OF THE OPEN AIR AUDITORIUM
at 7:54 PM No comments: